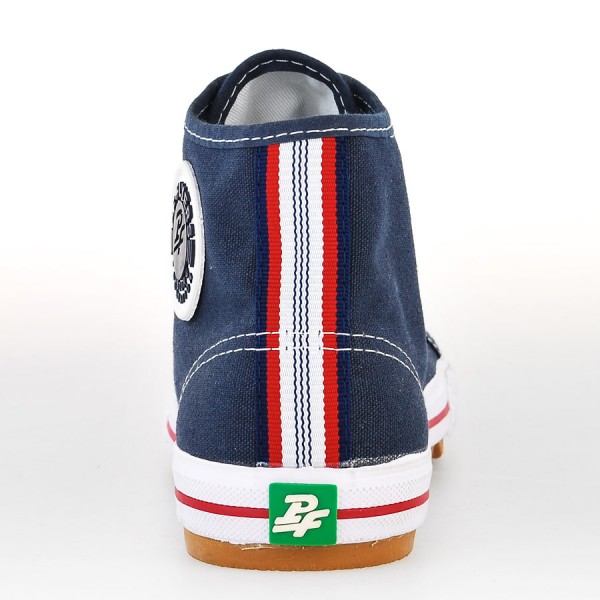 If you are over 55, you might remember the athletic shoe that was simply awesome back in the 60’s – PF Flyers. Before Nike was born, before Adidas had three stripes and long before Under Armor had even been conceived, PF Flyers were right up there with Chuck Taylor’s from Converse.

I remember the ads for Flyers – “Run faster and jump higher with PF Flyers!” SOLD!

You could get Flyers at the pricey kid’s shoe store where we lived, but that was it. There was no Amazon, no Athlete’s Foot, no Costco. But there was a chain of department stores that you could buy cheaper stuff, that was kinda like the good stuff. Yes, it was before Walmart or even before K-Mart. And Mom loved to shop at this chain store, WT Grant.

It was time to buy me a new pair of shoes for the start of school, and I thought that I needed a pair of PF Flyers. Mom thought I was in need of a pair of sneakers from WT Grant. I remember looking at those knock-off shoes and being bitterly disappointed.

I got home and decided I would make lemonade out of lemons and I would draw the green, iconic PF on the back of the shoes from WT Grant. Bad Idea. I totally butchered the rubber soles and the canvas upper.

I thought when Mom saw what I’d done to the knock-offs, I’d be toast. NOPE! Mom teared up a bit, put me in the Rambler wagon and headed off to get a brand new pair of PF Flyers. I wore them every day but Sunday that year. I wish I had kept them.

Those Flyers were more than cool, they were a symbol of my Mom’s sacrificial love for me. I’m pretty sure that I indeed ran faster and jumped higher, but the fact that Mom sacrificed and got me those shoes was something has stayed with me for 50 years.

As I was raising my kids, I loved getting them Nike’s and Adidas and Reeboks. And then when I bought my first grandchild (William) his first pair of Nike’s, I thought that I had finally arrived.

Do you remember what your PF Flyers were? Have you determined how you could sacrifice and leave an indelible imprint on your children’s lives, or grandchildren’s lives? To a 3rd grader, it was about the shoes. To a 57-year-old, it’s a reminder to be grateful for so many things, and how I can do the same for so many.

Would you join me this Christmas in giving and sharing gifts that are equally sacrificial and meaningful? Everybody has their version of PF Flyers. Don’t give them the WT Grant knock-offs. Give them the real deal and watch what happens.

When we give out of love, that which costs us something and means something to those we give to, the Divine does something supernatural. He makes it rememberable. In honor of that remembrance, I bought a new pair of PF Flyers last week, so if you see me walking around the church in my Flyers, you’ll know why.

Have Fun Giving Some PF Flyer’s this Christmas!