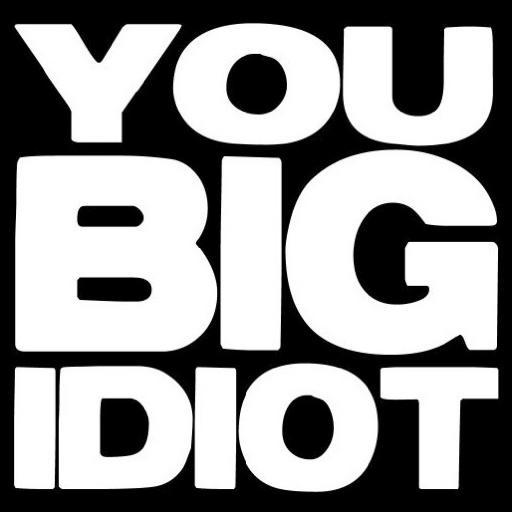 That will get your attention! Idiots – they’re everywhere!
They live around you, shop where you shop, and look harmless.
And then, BAM! They’re an idiot!

I read on Dictionary.com that the actual modern definition (although greatly offensive) is: “Informal. an utterly foolish or senseless person: If you think you can wear that outfit to a job interview and get hired,you’re an idiot!”

You have got to admit it. That right there, that’s funny!

My Dad used the word “idiot” often. He’d do something wrong and call himself and idiot. He would see somebody doing something foolish, and call them an idiot. When I didn’t cut the grass correctly, he called me an idiot! But Dad never intended it to be as hurtful as I received it, and over the course of 40 plus years, I slowly understood that “idiot,” was Dad’s way of cussing, as the only word closely related to cussing that I heard my Dad use, was ASS. As in Chuck, if you don’t grow up and act like a man (I was about 15), you will always be seen as an ASS. Got it Dad. For the record, I had a great Dad, and that was good advice as I look back now at age 57.

But IDIOT, that one never settled on me, until I found myself about four and one-half years ago, referring to myself as an idiot. And it struck a nerve deep in my soul. I was in a challenging season, and my view of me had dwindled down to five words. “Chuck, you are an idiot!” I was in a bad place and the use of the word “idiot” settled on me harshly.

While you might be thinking, that’s right, Chuck. You are an idiot. I’m so grateful that my Creator doesn’t see me that way. He says that I have been made in His image. That I am an Image Bearer of the Most High God. He says that He has plans for me to prosper. He says that I am to love others as I love myself. And I do not think anybody is an idiot. I believe that we offend God when we look at any of His creation with contempt, hatred, or words that sting and wound our souls.

Here’s the BIG DEAL! You have been created in the Divine’s image as well. You are an Image Bearer of the Most High God. Your Creator has plans for you to prosper and for you to encourage others with words that are uplifting, thoughtful, helpful and sincere. There is nothing about the Divine and His creation that remotely comes close to “IDIOT.”

So, if this season has you exhausted with yourself, and feeling like you don’t matter and that you are an idiot STOP IT! Look back in your mirror and see that YOU have been created for an extraordinary life. You are a child of the Most High God. You offer something to this world that nobody else can provide.

Don’t find yourself on the giving or the receiving end of the term “idiot.” I prefer to think that I’m a bit “original and creative.” And, have you ever thought that while you saw somebody that brought the term “idiot” to mind, someone might be looking at you, saying the very same thing?

The Divine Has Created You in an Original Mold – Act Like It!