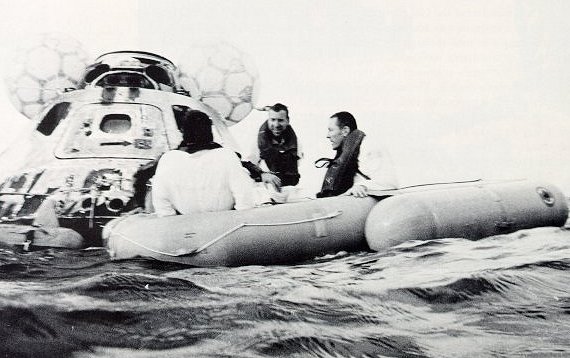 One of my favorite movies is Apollo 13. I am old enough to remember watching the small television in my Pop’s house in Daytona Beach, Florida as Neil Armstrong took “one giant leap for mankind” onto the moon. President Kennedy’s goal of landing men on the moon’s surface was accomplished on the Apollo 11 mission when astronauts Neil Armstrong and Buzz Aldrin landed their Lunar Module on July 20, 1969, and walked on the lunar surface.

I was fascinated as I watched and listened to the landing and days later the splashdown of that small capsule in the ocean. But like most things in this temporal life, even landing on the moon became ho-hum to the American populous.  By the time Apollo 13 launched, it was a small blip in the news cycle, until the fateful words uttered by Jack Swigert as he saw a warning light that accompanied the bang, and said, “Houston, we’ve had a problem here.”

Now that the lives of the crew were in danger, the news shows got more interested. On Earth, flight director Gene Kranz pulled his shift of controllers off of regular rotation to focus on managing consumables like water and power. Other mission control teams helped the crew with its daily activities. Spacecraft manufacturers worked around the clock to support NASA and the crew. The core issue was that Kranz had to direct multiple teams to accomplish one singular purpose. That purpose? To safely return the crew to earth by taking a space capsule designed to land on the moon like a rocket that would propel them back into earth’s orbit without frying them. One degree to sharp and they are a popsicle. Another degree to flat and they are a pop-tart.

Gene Kranz managed the teams with these instructions, “failure is not an option.” And yet, it was a very real option. You see, the mission designed to land a crew on the Moon, for the third time was already a failure. A new purpose and the new mission ensued.

As you know, having seen the movie, what was a failed landing became one of NASA’s greatest moments and one of our most powerful lessons on failure.

In my years in business, ministry, life, and leadership, I’ve failed far more than I’ve won big. Somehow, I’ve earned a Ph.D. in failure! But in the seasons of failure, like with Apollo 13, I have learned my greatest lessons and found my way back to what matters most. The new job of the multiple teams working on Apollo 13 was to bring those men home, alive. And in the failure of the original mission, a new mission and success followed.

If you’re in or have recently been in a season of failure, stop worrying about it. Stop whining about it. Stop blaming everyone else for it, and get up, dust yourself off and learn from it. Failure was most definitely an option, and a good one. What was birthed in failure, grew to become a powerful leadership lesson from which we can all learn.

It is in our failures that we find:

If you are wallowing in failure or hiding from it, step up and let the little boy or girl sit down and the man or woman stand up. Own it! Learn from it! Failure is only fatal if we give it permission to be fatal. It is never about what went wrong, but what we learned through it that counts! God is for you! He is not leaving you to spin wildly into space without a plan to use failure as a tool for you to succeed wildly!

Don’t stop when failure comes your way! Get back up! The Beatles were told that they would never succeed! Michael Jordan was cut from his junior high basketball team! Walt Disney was fired for not being creative! Failure is either your launching pad for success or a grave where you quit and determined you were a victim, not the victor. Suck it up, buttercup! YOU’RE NOT DONE!