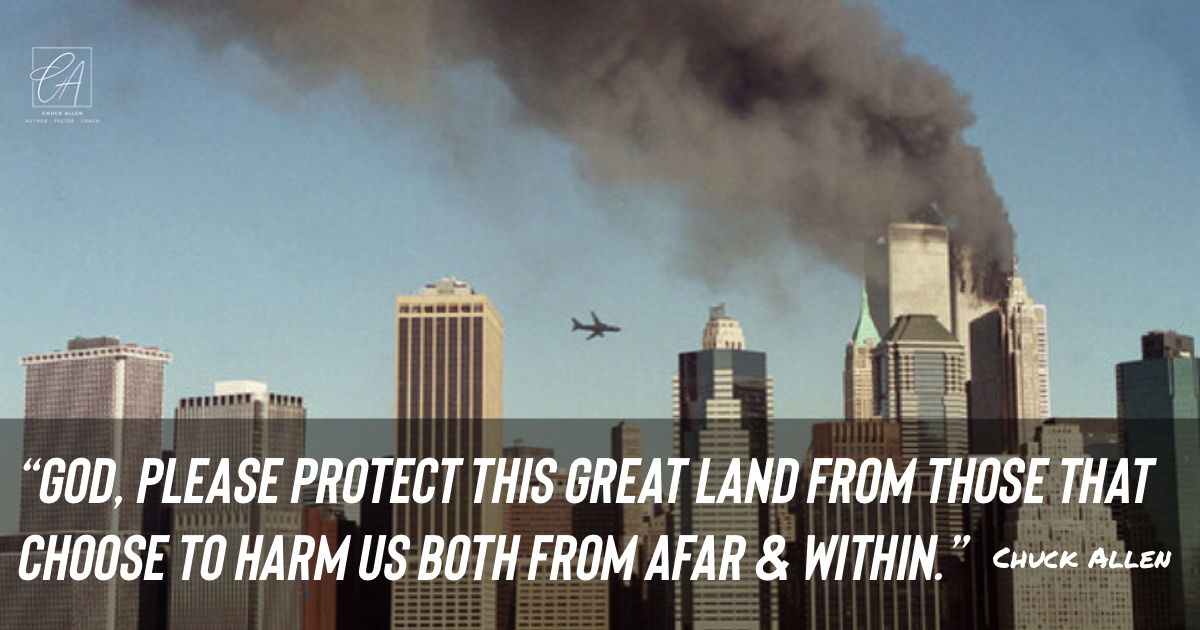 This weekend, we Americans remember the tragic loss of life and liberty experienced on 09.11.01.

I recalled walking into the Alpharetta office building, where I worked at that time, and seeing the reports that American Airlines Flight 11 had struck the North Tower at 8:46 am.

By the time that I reached my office, just seventeen minutes later, at 9:03 am, the World Trade Center’s South Tower was hit by United Airlines Flight 175.

Given the degree of hate and division in our country, only 20 years later, I am amazed at our incredibly short memories. On September 12, 2001, we were a country unified in serving one another, caring for our neighbors, and honoring our heroes. I pray that it doesn’t take the great uprising of evil to stir our American hearts toward faith and unity…once again.

I also pray that we will REMEMBER how horrible the pain was, deep in our American souls when we saw people murdered on live television and thousands of family’s futures ripped from them as a result of pure hate.

We must tell the story of why we were attacked, how we were attacked, and the way we responded in the moments following the attack. We must remind our next generations that cannot remember, or did not experience the ache which we all felt.

Country artist, Alan Jackson asked the question, “Where Were You When the World Stopped Turning?” Here are the lyrics:

Where were you when the world stopped turning on that September day?
Were you in the yard with your wife and children
Or working on some stage in L.A.?
Did you stand there in shock at the sight of that black smoke
Rising against that blue sky?
Did you shout out in anger in fear for your neighbor
Or did you just sit down and cry?
Did you weep for the children who lost their dear loved ones
And pray for the ones who don’t know?
Did you rejoice for the people who walked from the rubble
And sob for the ones left below?
Did you burst out with pride for the red, white, and blue
And the heroes who died just doing what they do?
Did you look up to heaven for some kind of answer
And look at yourself and ask what really matters?

Let us be a people that look at ourselves and ask, what really matters.