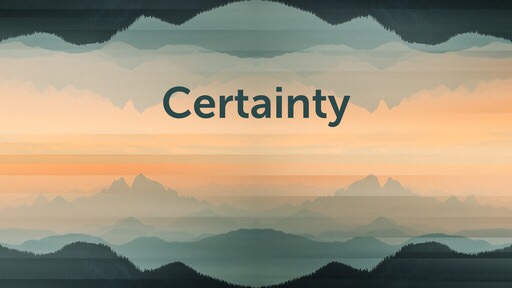 THE ASSUMPTION OF CERTAINTY by ACHUCKAllen

Certainty is something that we should hold near and dear to our hearts and souls. There are only a handful of things that I am certain of. I’m certain of God’s never-ending love for me. I’m certain that He is certain. And I’m certain that I cannot do anything that would cause Him to cease loving me. Trust me on this one – I’ve given Him a couple of million reasons to not love me.

Why then are we, as a people so terminally certain about so many things? I hear folks shouting and screaming on news shows over things as though they are terminally certain of every word they speak. If you watch Fox News, they are certain that President Trump is a saint. If you listen to MSNBC, they are certain that President Trump is Satan himself. Don’t we both know that he is neither? If you hold on to bigotry and racism, you are certain that you are better than others by way of the color of your God-given skin. If you assume that you know the very heart of another, but truly and deeply, you have hidden sins of your own…hush! Please, just shut-up!

A dear friend of mine used to put it this way, “Don’t come to my house to clean my toilets, when yours isn’t even flushed.” Gross analogy, but you get it, right?

I heard a fellow pastor say that “the further you are away from a problem, the easier it’s solution seems.” And “the closer you get to that problem, the more complex it suddenly becomes.” He was so right on this issue.

A wonderful gift that we might consider offering this world is to cease offering up simplistic, simple-minded solutions from afar. Maybe the world is dying for folks to stop the insanity of hurling stolen one liners from entertainers, preachers, or politicians and seek to understand while suspending judgement — At least until we wade through the debris of the up close look at the people in the middle of the problem.

If you are wanting to wave a flag and shout amen, please suspend that as well. You see, I am a recovering “certaintist” myself. I am committed to getting a bit closer to the subject at hand, prior to my lofty and certain assumptions. And no, I do not think President Trump is Satan, nor Saint. But he is also not at fault for my poor grammar, your bad choices, or your spouses bad mood. He might however, be guilty of totally creating a circus out of the admission and security at the Mercedes Benz Stadium for the National Championship Game that my beloved Georgia Bulldogs came so close to winning.