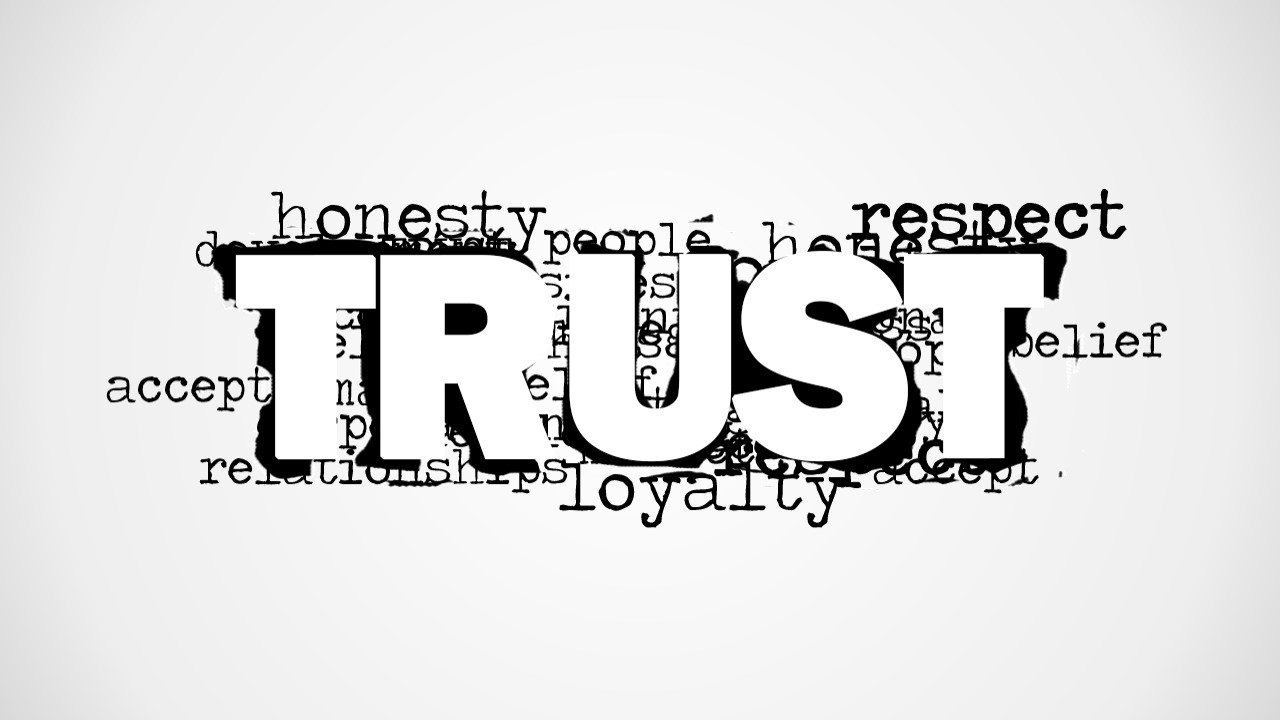 TRUST – The five letter word that fuels our relationships, families, churches, businesses and governments. Greater levels of trust lead to greater levels of success, fulfillment, and peace. Lesser degrees of trust and we begin to bankrupt those same relationships, families, churches, businesses, and governments.

Trust is a fragile commodity! It is essential to living a peace-filled, healthy life. It is on demand 24/7. It is on trial 365. The truth is that trust is earned over a season of time
and can be lost in a second.

We only fully trust when we trust both character and competency. It requires both, simultaneously. We trust people, not organizations. People are what cultivate or destroy trust. We learn to trust organizations as a result of trusting those leaders, and those people, not the organization. Then why do we need both character and competency? Because we fully trust people that are who they say they are and do what they say they will do. AND, we trust people because we know that they know what they are doing!

I’ve been on the wealthy side of trust and the bankrupt side of trust. I’ve left people wondering if my character could be trusted, and I’ve wondered if others character could be trusted. I’m pretty sure I’ve delivered a lack of trust far more than others have shown me. I’ve also been in a position where people saw my competency, and I theirs. I’m afraid that I’ve also charged on while proving I have no idea what I’m doing and have seen it displayed in others. It takes both character and competency!

We open “trust accounts” with every person we live with, work with, and worship with.
It fuels our relationships and bonds our souls with Gorilla Glue.
But it also is on trial for its life, every second of every day.

Several years ago, a pastor friend of mine was to leave the office in time to stop and buy two CDs for his daughter’s birthday party, which was at 6:00 pm. As usual, he was running late, ran into the store, grabbed two CDs for his girl and one for him. As he was walking to his car (remember, he’s already late) he realized that although he had three Cds, he’d only paid for two. Instant trust test. He turned around, waited in line, told the young clerk that she had undercharged him and that he needed to pay her for the other CD. Her reply, “I did that on purpose.” “Why would you have done that” my buddy replied. Her answer was priceless. “I did that to see what you would do. My family visited your church last Sunday when you were preaching on character. I just wanted to see if you lived what you preached. That’s very cool.”

Like I said, she knew he had the competency to preach, but wondered if she could trust the character of the preacher. Your trust accounts are at risk with every decision you make. They can be depleted and closed with one terrible, stupid decision, but they are built over the long haul.

I have failed people so many times and left a trail of distrust that seemingly cannot ever be repaired only to watch the Divine restore the season of doubt, failure, and selfishness into trust once again. The Divine specializes in restoring your trust in Him, in others, and in you. Yes, I have some ugly scars from my seasons of less than stellar character or lack of competency. Those scars remain as a reminder of how blessed it is to live in trusting relationships with the Creator of the Universe, His creation, and His providence.

Add a deposit to you trust accounts today. Look back at the scars when you were in a trust deficit, and ask the Divine for wisdom, character, competency and earned trust.
He specializes in all of those, and much more.

It is His character and competency, lived through our lives that restore trust, hope, love, joy and peace in our lives. It is His forgiveness that allows us to enter into a new season where trust can be restored. Today, your trust will be tested in character and competency. Trust the Divine, walk in His footsteps, and trust His character. And when you place your head onto your pillow tonight, you’ll count more than sheep. You’ll be earning interest on your trust accounts.