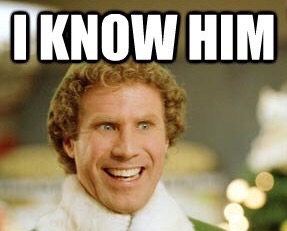 I love the movie ELF.

When the Gimbles Department Store manager announces that Santa is coming the next day, Buddy the ELF is so excited and screams SANTA – I KNOW HIM!

Wouldn’t it be awesome if we had that level of childlike faith when we saw a Nativity Scene? If, when we saw Mary, Joseph, the cattle, and the shepherds, what if we were to shout; JESUS – I KNOW HIM!

Wait, back to the cattle for a second. I remember dressing up like a shepherd when I was a little kid and singing Away in a Manger in a live nativity scene. It seems like the song included something about the cattle are lowing. What the heck? What kind of sound is lowing?

“The cattle are lowing. The Baby awakes. But little Lord Jesus. No crying He makes.” As I listened an important question popped into my brain  What noise, exactly, were the cattle making when they started lowing? Was this typical cow talk? Did lowing just sound better than mooing in the lyrics or is lowing a more spiritual cow sound? Lowing is defined at dictionary.com as “the characteristic sound uttered by cattle; a moo”. Who knew?

I discovered that this verse was not original to the song. It was added for a children’s program in the early 1900’s by a minister named John T. McFarland. While verse three is not a part of the original Christmas carol it does create an image of Jesus that we need to rethink.

I’ve always pictured Mary and Joseph as awed spectators watching the baby Jesus acknowledge the shepherds and welcome them to his place (remember, the earlier lyrics told us he didn’t have a crib). My images of the baby Jesus were pretty childlike. But I wonder if we don’t carry a little of that perspective into our adult Christian journey (like Ricky Bobby in the movie Talladega Nights – shake n bake).

This Christmas, why not take a little time to think about the implications of the incarnation. That nice little theological word is used to denote when the second person of the Trinity, God the Son, assumed human form in the person of Jesus and became both fully God and fully man. C.S. Lewis wrote: “The central miracle asserted by Christians is the Incarnation…. Every other miracle prepares for this, or exhibits this, or results from this…. It was the central event in the history of the Earth–the very thing that the whole story has been been about.”

Take a moment to meditate on the mystery of that. Fully God and fully man. I am sure the little Lord Jesus would have had the normal response to being awakened by any cow noise…lowing or other. His swaddling clothes had to be changed just like any baby. Jesus came as a deity, in diapers.

My dear children, I write this to you so that you will not sin. But if anybody does sin, we have one who speaks to the Father in our defense, Jesus Christ, the Righteous One. I John 2

Jesus became our advocate and our salvation when He arrived on earth. The miracle in the manger was not Jesus ignoring cows lowing. The miracle was God becoming flesh – for us! Rejoice, rejoice Emmananuel. And ransome captive Israel. So shout it from the rooftops – JESUS-I KNOW HIM!

May your Day be Merry & Bright!