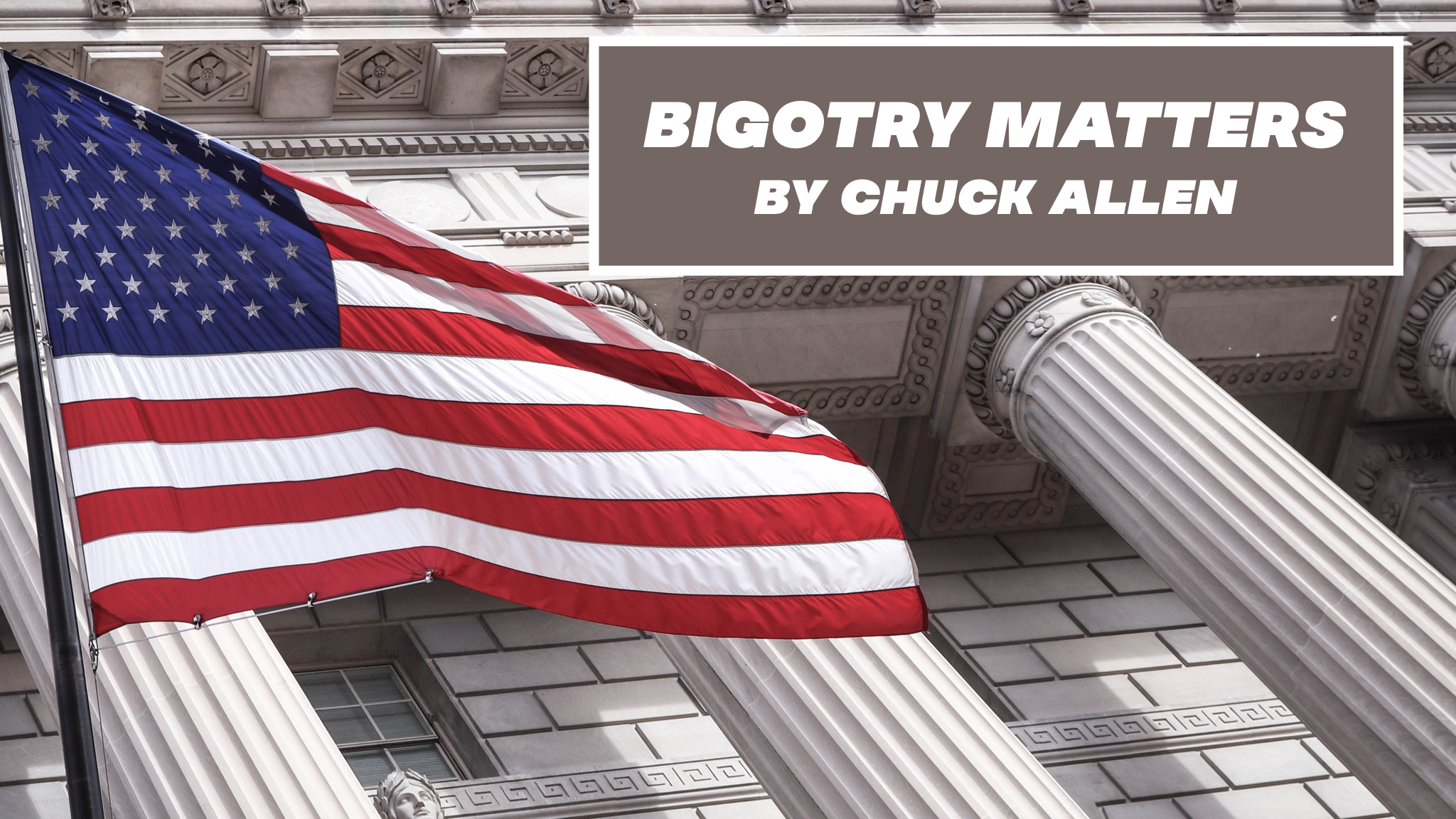 Let me start this post with a simple yet poignant statement from our 40th President, Ronald Reagan, “Let me speak plainly: The United States of America is and must remain a nation of openness to people of all beliefs. Our very unity has been strengthened by this pluralism. That’s how we began; this is how we must always be. The ideals of our country leave no room whatsoever for intolerance, anti-Semitism, or bigotry of any kind — none. The unique thing about America is a wall in our Constitution separating church and state. It guarantees there will never be a state religion in this land, but at the same time, it makes sure that every single American is free to choose and practice his or her religious beliefs or to choose no religion at all. Their rights shall not be questioned or violated by the state.

I would also like to follow that up with a word from one of our Founding Fathers, Thomas Jefferson, “Bigotry is the disease of ignorance, of morbid minds; enthusiasm of the free and buoyant. Education and free discussion are the antidotes of both. We are destined to be a barrier against the returns of ignorance and barbarism.”

My fear for this great land is that we have rapidly become a nation that destroys our opportunity to be the shining city on a hill. In His Sermon on the Mount, Jesus described that Christians are to be “the light of the world.” That we are to be like “a shining city on a hill.” I fear that we have become a nation of light snuffers and city wreckers. Too often, bigotry is described in America through the singular lens of black vs. white tensions, prejudices, and hate. But I’ve discovered in this country, founded on the principles of freedom, we are now determined to destroy any person, organization, or thought that doesn’t agree with our own.

Before you hurl your first disagreeable thought or hearty amen, hear me. This is not a one-sided issue. Every side is presently guilty of the hate-filled anger and bigoted speech that I hear about others and have even received regarding me, my church, and my faith.

Our assumptions are not known knowns. Our bitterness and bigotry are based on unknowns. Therefore, they are built on faulty foundations that break down with reasoned interpretation and understanding. Case in point: Pick the audience that any bigotry is assigned to, be it racial, religious, sexual, educational, etc. Once you’ve identified that bigoted assumption, imagine having to share a cab ride with any person in your bigoted category, let’s say for 60 minutes. And you engage in a conversation with that person and genuinely disagree with them on any level. Is it then your assigned role to convey to them, or worse about them, your great displeasure with who they are, color they are, educational or religious preference? What if you are heterosexual and they are gay? Can we not see the person without the tagline?

I’m not suggesting that we all agree on issues of conviction or preference. If anything, I’m stating that we should disagree! But isn’t that the American experiment that is 250 plus years in the making? But brave men and women didn’t lose their lives to allow any of us to use the modern accessibilities of technology and information to destroy and despise one another. Instead, they died for a belief that our constitution was not flawed in its preamble: “We the People of the United States, to form a more perfect Union, establish Justice, insure domestic Tranquility, provide for the common defense, promote the general Welfare, and secure the Blessings of Liberty to ourselves and our Posterity, do ordain and establish this Constitution for the United States of America.“

I’m afraid I have to disagree with so many things. I do not like the fact that an Olympic athlete snubs the flag and national anthem of the USA. As a matter of fact, it sickens me. BUT! That right is indeed hers as an American citizen. I disagree with so many freedoms granted by the constitution of the United States of America. BUT! I am willing to defend that very freedom to avoid the tyranny that inevitably follows in the path of squelching it.

Another case in point: Chick-Fil-A is defined as a “Christian Company.” But that is not possible. Organizations are not “Christian,” people are. Yes, they employ many Followers of Jesus, and yes, the Cathy family has been consistent in their faith walk for decades. I should stop and state that I may be the only person on the planet that doesn’t have a preferred palate for the Chick-Fil-A menu. I know, let the hate mail begin! But here is the point, Dan Cathy has ascribed to the biblical position on marriage as one man and one woman. Can we not attack his business as homophobic and hateful? That is nonsensical, at the very least!

I’ll never forget the day that I received this email from a senior adult at my church (embarrassment fully added here). It is quite literally a bigotry-filled rant that cuts against every single teaching of Jesus. “I cant help but tell you there was lots of grumbling at church today.  Most people completely support the Espanol ministry. What the grumbling is over is having to constantly undergo Spanish lessons and today iced the cake with a full blown Mexican party complete with Mariachi band and food plus the ongoing Spanish word lessons.  Please this is the United States of America, We do not want this kind of stuff at our church.“

There it is! Bigotry is at its finest and a significant reason people say no thank you to the local church! And I do not blame them. If there has ever been a place that should be committed to breaking down the walls of prejudice and bigotry, on any level, it is the Church Jesus claims as His own Bride!

I am more committed than ever before to model and lift high the ideals built within the foundation of our nation in search of a more perfect union. A nation where “We hold these truths to be self-evident, that all men are created equal, that they are endowed by their Creator with certain unalienable Rights, that among these are Life, Liberty and the pursuit of Happiness.”

Disagreeing with me or anyone else is fine. It is even encouraged by our Creator and the declaration of our own independence and constitution! When then can we not determine that God made no mistake in who He has created? Why can we not choose to live more like Jesus and less like the Pharisaical leaders of the very people He came to this earth for? Why can we not choose to discover our own convictions, speak up for them, and know we will be disagreed with, and yet know that is equally true once the shoe is placed on the proverbial other foot?

If we were to spend our energies on becoming the human being that God desires us to become and less energy on how we can find fault or destroy someone else, this world would be a far greater place to exist. I am not suggesting that we try to live in some Pollyanna world with rainbows and no-calorie doughnuts. I am simply suggesting that we each have so much to work with and to work on that we are literally ruining life for so many as we verbally, spiritually, and physically beat them down.

I’ve been guilty of this, and so have you. But surely we are better than that? Can we not grab hold of Matthew Chapter 5 and allow the words of Jesus to clarify how we are to live and enjoy this life? Can we not, as Americans, not listen to the words of Reagan when he stated…

“I’ve spoken of the shining city all my political life, but I don’t know if I ever quite communicated what I saw when I said it. But in my mind, it was a tall, proud city built on rocks stronger than oceans, wind-swept, God-blessed, and teeming with people of all kinds living in harmony and peace; a city with free ports that hummed with commerce and creativity. And if there had to be city walls, the walls had doors, and the doors were open to anyone with the will and the heart to get here. That’s how I saw it and see it still.”

We were never created to be a nation of hate, bigotry, intolerance, or spiritually empty people. We were and are the greatest nation on this planet and still the greatest hope for a world to live in peace. Our constitution, the document that those brave patriots fought to create and then uphold, demands better from us. May we once again become a nation worthy of God’s richest blessings.