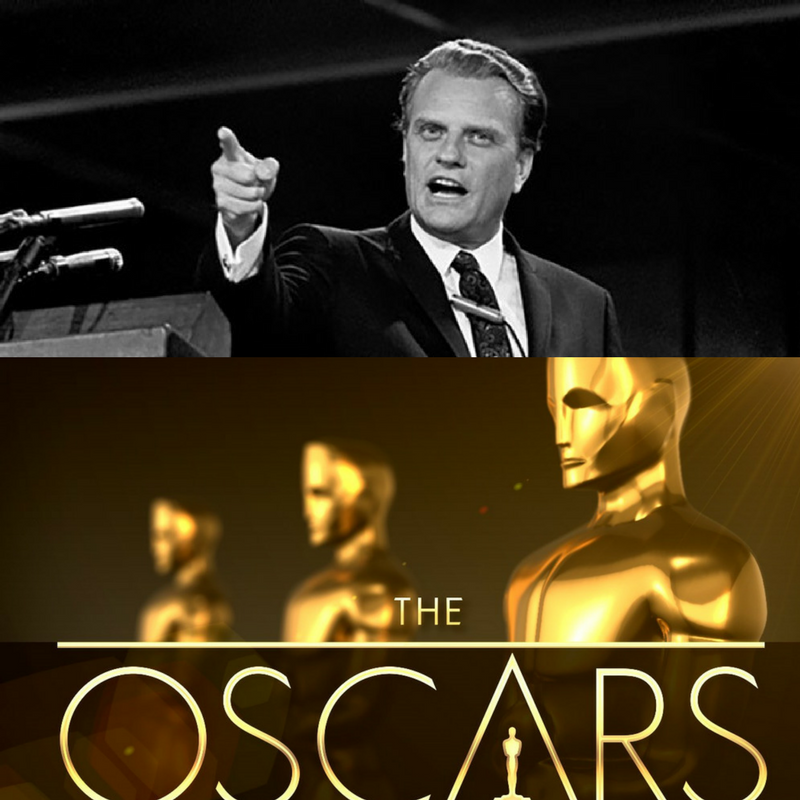 Billy Graham & The Oscars by AChuckAllen

Last night, Jenny and I were watching a special on the Life of Billy Graham. I was so moved by the legacy that he has left. I saw footage of him in communist countries proclaiming Jesus as Savior. I saw him in poor countries proclaiming God’s love. I saw him proclaim that the gospel is the great equalizer and offers no room for segregation and bigotry to the old south. And I saw him offering counsel to eleven U.S. Presidents.

I was emotional and so moved by his singular message – God loves you and He has a plan for your life. He sent His Son Jesus to die for your sin and by faith, we can receive God’s free gift of salvation. It was overwhelming to see how the life of one faith-filled follower of Jesus could literally change the world for millions of people. I doubt that we will ever see that happen again.

When the special ended, we flipped the channel over to see the Oscar’s. I was dumbstruck at the immediate change in the messaging and tenor of the two shows. As I watched a few minutes of the Oscars and saw and heard millions of dollars of influence do anything but draw our heart’s affections toward the Divine, I was mindful that we are living our legacy each day. Billy Graham wasn’t campaigning for glory. He was preaching the Gospel! He wasn’t looking for a trophy, he was honoring the Divine!

Don’t get me wrong, I love going to the movies. I actually enjoy the Oscars, until they get political and snarky. It wasn’t that the Oscars had done anything wrong! It was just a whiplash effect from seeing a humble preacher of the Gospel, and then the glitz and glamour of Hollywood’s big night. Billy Graham was a man that had given his life to sharing Jesus to a “hungry for hope universe.”

I’m not saying that Hollywood should become the new Billy Graham. As a matter of fact, many of the films that are labeled “faith-based” are bad movies, with a great heart.

I am saying that as a follower of Jesus, I pray that the legacy of faith I leave behind won’t be of forgotten statues, but of thousands of men and women that have chosen to follow Jesus as a result of what we are trying to build at Sugar Hill Church. I know that I am just a pastor in a great little city northeast of Atlanta, but I don’t want to have lived this life having won a few trophies and never winning a few thousand people into a life-altering relationship with Jesus.

You will add another few pages of your legacy book today. Will you look for a trophy, or accept the love of a King?