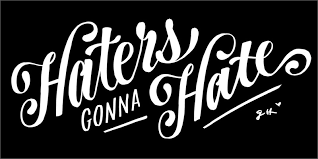 Left or Right, Conservative or Liberal, Republican or Democrat, the childish clammer of hate has got to stop! If we think this is new to the American political scene, think again. I remember when Bill Clinton won and the right went nuts. I remember when George W. Bush was elected and the left went berserk.  Then when Barak Obama won, the right was up to bat and swung for the fences with the rhetoric. And we have achieved an entirely new level of hate speech with Donald J. Trump.

Isn’t it interesting that we blame the guy in the Oval Office for everything? We blame him for what he says, what he doesn’t say, what others say and what we wish he wouldn’t say. And yes, before you start hating on this post, the right did this toward President Obama, it was brutal toward W, Clinton and every other president in my lifetime. We simply didn’t have the communication tools that we have today. Before we had CNN, MSNBC, FOX News, or Yahoo, we actually trusted the newspapers and local news. I am convinced that it just keeps getting worse as another person is elected to serve as we verbally beat the crud out of them.

As for my take? Assuming that anyone would care… STOP IT!

We have made it impossible for our best and brightest to choose to lead in public service. I would never want my son or daughter to place themselves in harm’s way of the public scrutiny. Until such time as America chooses to elect honorable people, and allow those honorable people to lead without critique on every single syllable, phrase, pause, letter or imaginary thought, we will continue to offer up less than ideal leaders.

I want to be a part of the solution, but I am not really sure where to start. Maybe we all could step off of the certainty bus and grab a dose of reality. We are flawed, sinful people that elect flawed sinful people. Then we must stop devouring the same people we elect.

Think about it…if you were leading anything in the public eye, what might be said about you? If you had a camera or microphone on you 24/7, what might be said of your choices or actions? If you were in charge, I think you would realize that from a safe distance, everything has a simpler solution. And the closer you get to a problem, the more complex the solutions become. From a distance, just turn our military loose and light up the nut-job leading North Korea, but up close, what do we do with the millions of people in Seoul, South Korea, just 38 miles from the DMZ?

I think we must be willing to give the benefit of the doubt to those leaders that know far more than we do at some point…even if they are not on our side of the aisle. But then, what would we watch, listen and post?