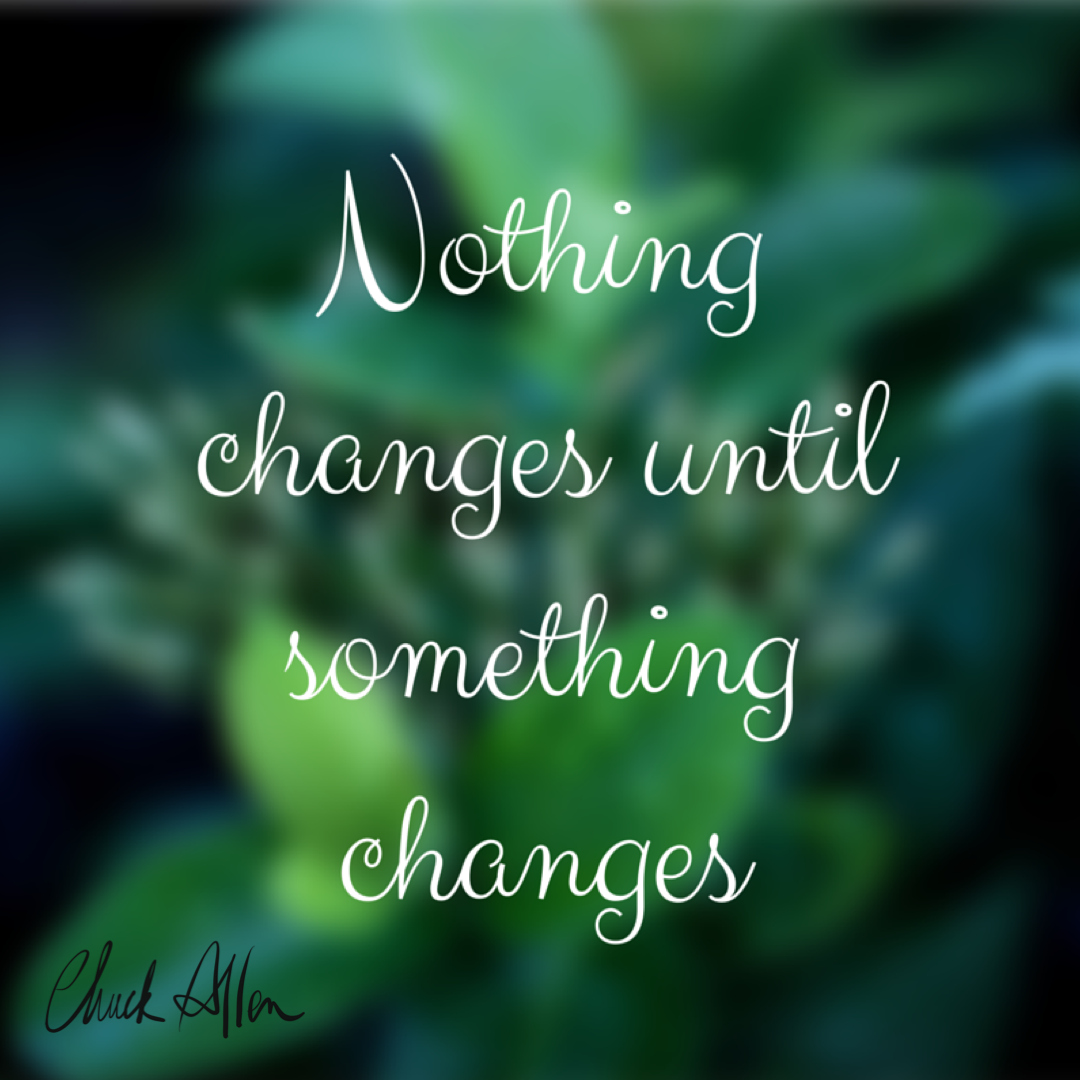 If you are wealthy, poor, somewhere in the middle, or clueless, the title of today’s article fits us all at some point in time. Eventually, we all land in the center of “Oh Crap, Something Has Gotta Change!” And that’s when we realize it – NOTHING CHANGES UNTIL SOMETHING CHANGES! You might say, great Chuck! Now that your have proven you role as Captain Obvious, how in Heaven’s name can I possibly hope for change in the middle of this mess? I want to offer a solution that has served me well. And let me assure you, I know what it is like to be in a mess!

Let’s see what the Divine might say to us on this subject of CHANGE. You see, He has the formula to:

The Gospel Writer, John tells us of this first hand experience with Jesus at a wedding in Cana:

John 2:1-11 The next day there was a wedding celebration in the village of Cana in Galilee. Jesus’ mother was there, 2 and Jesus and his disciples were also invited to the celebration. 3 The wine supply ran out during the festivities, so Jesus’ mother told him, “They have no more wine.” 4 “Dear woman, that’s not our problem,” Jesus replied. “My time has not yet come.” 5 But his mother told the servants, “Do whatever he tells you.” 6 Standing nearby were six stone water jars, used for Jewish ceremonial washing. Each could hold twenty to thirty gallons. 7 Jesus told the servants, “Fill the jars with water.” When the jars had been filled, 8 he said, “Now dip some out, and take it to the master of ceremonies.” So the servants followed his instructions. 9 When the master of ceremonies tasted the water that was now wine, not knowing where it had come from (though, of course, the servants knew), he called the bridegroom over. 10 “A host always serves the best wine first,” he said. “Then, when everyone has had a lot to drink, he brings out the less expensive wine. But you have kept the best until now!” 11 This miraculous sign at Cana in Galilee was the first time Jesus revealed his glory. And his disciples believed in him.

Jewish weddings are grand events with drama and excitement. For the Israelite, it was the most grand event in life, where festivities would last for days. The ceremony would take place in the evening following a feast. Then the couple would be taken to their new home in a parade, through the most roundabout route possible in the town., they had an open house for a week, where they were treated like a king and queen, and granted any request that they made. At this wedding, this new couple would eventually learn this lesson because of an impending disaster…

At Jesus’ first truly public event, we find him at a wedding. At this wedding, disappointment is looming at the doorstep.  A true disaster was in the making. The wine had run out. This would be a huge disruption, and the host family would look very bad. In this culture, they will not have fully discharged the duties of hospitality. Maybe they couldn’t meet that financial need. Maybe they miscalculated. Whatever the reason, this was such a faux pas in their culture, that the family would be liable for a lawsuit and held in the lowest esteem in their community. Seriously – Wine was a picture and symbol of God’s blessing and presence on the lives of these two families, the newly married couple and the community thay lived in. At a  Jewish wedding feast, wine was an essential. It was a symbol of exhilaration and celebration. Mary, the mother of Jesus says, “Son do something!” Then she says to the servants “do whatever He tells you to do!”

Jesus tells the servants to take the vessels designed for ceremonial washing and fill them with water. Each vessel containing about 20-30 gallons. Then He said to dip some and take to the Master of Ceremonies. Upon drinking the dipped cup, the MC says to the host that most folks drink the good stuff early and once a little happy, they serve the Boone’s Farm. This wine, made from the hands of Jesus was the very best wine.

What was the key to this story? What would have been a sad day was returned to the glad day it was intended to be. What seemed like the inability to be the hostess with me mostest, turned in great ability to convey the goodness and graciousness of the Savior, lived out at a time of great celebration. Ane the hopelessness of the host with a broken heart, turned into a healthy and joy-filled heart. But why? It all boiled down to these words! “Do what He tells you to do!”

I’m living proof that He indeed loves us so much that he replaces and repairs our hurting hearts, takes our inability and directs us with His ability!               Aren’t you grateful that He specializes in the “good stuff!”

Today, just do what He tells you to do!