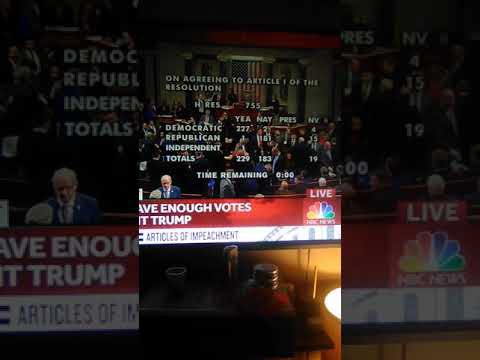 I’ve watched the Impeachment vote and the encircling fall-da-rah that comes with it and I’m left with three thoughts that are clearly an indication of my simplistic mind. Nonetheless, I do indeed have three thoughts that seem to remain in this cycle of political antics in Washington DC.

First, I think we could all agree that President Trump doesn’t need to be the spokesperson for a kinder/gentler nation. He makes it hard for guys like me to like him. I desperately wish to snatch his smartphone away from him and end the Twitter battles. It’s just another antic that I liken to NFL players that strut like peacocks after simply doing their job…Come on Man! Having said that, my church is benefitting greatly from the healthiest economy since, well…ever. My house has increased in value, the markets continue to set all time highs and the trade deals that he bantered about in the election have been reset with healthy guidelines and a path to a better and more stable future. So, there’s that. Oh, yeah. Back to the three things. Just because he is a bully, a flame throwing businessman, a rude and crude spokesman and lacks many of the finer graces, that doesn’t make him a criminal. It doesn’t seem to meet high crimes and misdemeanors. I have heard the evidence. To dislike Donald J. Trump is understandable. To impeach him is silly, middle school theatrics.

Second, I have seen men and women argue and bicker straight down party lines. Is it truly possible to have a viable third party in the 21st century? Is it not possible to have electable people that can think with conviction and not political expediency? This system has taken America in a direction that is not healthy and is possibly unrecoverable. And before you chuckle, thinking it’s whatever the “other party” is to you, it’s both party’s fault. I’m disgusted by both tire-slashing, trash-talking selfish party line tirades. It’s past time for a third party, or at least a handful of outliers that will speak with a voice of reason, rather than a voice of rancor.

Third, nobody is really winning at this game of name calling. If you are a Never Trump person, you might think that “we finally got him.” If you are a MAGA hat wearing Republican, you might be thinking, “we will get the House back and we are definitely winning the 2020 election.” The truth is that America is the loser in all of this. Are we to call for impeachment when our local mayor wins, but the city council wanted somebody else to win? Are we to assume that Presidents in years past have never had a call like the one that President Trump had with the President of Ukraine? Stop it! Just stop it!

Every four years, this great country has the privilege of choosing a President to lead the way. I’ve voted in every presidential election since Jimmy Carter in 1976. I’ve seen a few winning elections and a few losers. Either way, we have an opportunity to change horses every 48 months. At this rate, we will be carrying the results of Major League Baseball games to the Supreme Court because half of America hates the team that won game seven in the bottom half of the 9th.

I realize that the chatter is louder these days as a result of social media and the digital age, but we are better than this foolishness, aren’t we? I pray that we are. I’d hate to think that my grandchildren would have to devalue American leaders so much that we couldn’t agree with the old adage, “sometimes you win and sometimes you lose.”

Just three things I thought about while watching Survivor, I mean Congress today.