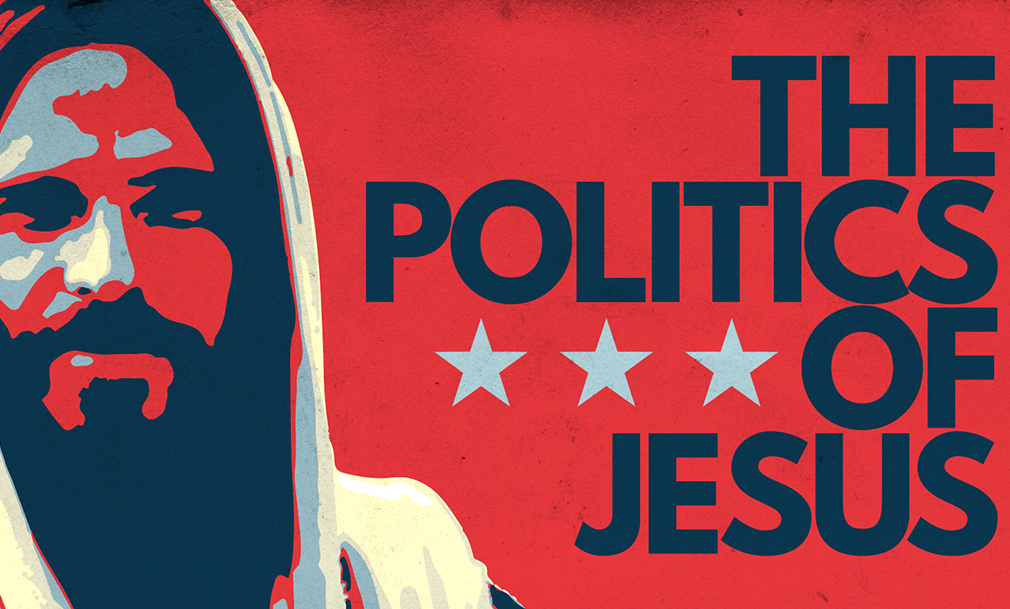 The Politics of Jesus by AChuckAllen

I grew up in the home of a politician. For those of you that knew my father, you knew him as Brother Ken or Pastor Ken. But long before that he was Ken Allen, State Representative, State Senator, Chairman of the Republican Party and almost Lieutenant Governor.

You can imagine, there were no donkeys in our home and when I voted in my first presidential election and cast my vote for Jimmy Carter, my dad almost cried.

Over the years I’ve voted for folks on both sides of the aisle and I must confess that in my past 4-5 years I’ve discovered that there is a reason why we are such a diverse culture —- we don’t think the same way for a purpose. I’ve learned to lay down my party lines and sought after the line that God the Creator of the Universe has laid down. Friend, that’s worth this discussion.

Here are a few thoughts to prime your pump.

1. If Jesus had chosen to walk the face of this earth in our generation He wouldn’t sit on either the right or left side of the aisle. He has an aisle all His own. If Jesus were here in the flesh today, what would He do in our present political environment? Would He campaign to get His favorite candidate elected? No, He would still be declaring the message He spoke about when He came during the first century. The solution to man’s problems is not to reform present governments, but rather to replace them with the Kingdom of God.

2. If Jesus were to vote, He would vote for His Father and His FATHER’s ways. “Now after John was put in prison, Jesus came to Galilee, preaching the gospel of the kingdom of God, and saying, ‘The time is fulfilled, and the kingdom of God is at hand. Repent, and believe in the gospel’” (Mark 1:14-15)

3. If Jesus were to lobby the hallowed halls of Congress, He would hold up His Word as evidence. Under the scrutiny and temptation following 40 days without food, Jesus replied to Satan…”It is written” The Son of God knew the Word of God was the Bond of God as a Covenant with God and His people!

4. If Jesus were to be under the scrutiny of a special counsel, He wouldn’t be guilty of anything but being fully, completely and utterly the way, the truth and the life. The question we should be asking, then, isn’t whether Jesus is on our side, but whether we’re on his. This is the appropriate question not only for politics and government, but also every other concern.

5. If Jesus were to look at our present government, He would say, honor your government. Pray for your leaders and seek the face of the Heavenly Father before you vote…but vote! “Let every soul, be subject to the governing authorities. For there is no authority except from God, and the authorities that exist are appointed by God. Therefore whoever resists the authority resists the ordinance of God, and those who resist will bring judgment on themselves” Romans 13:1-2

In the Old Testament, in a time of political upheaval…some might have called it a constitutional crisis, three young guys show us the way. In Daniel 3:1–30, the King builds a golden image (most likely of himself) and demands, by law that all the people of the kingdom fall tp their knees and worship this golden image when they here music. I mean, what in the world?

Friend, This World Wants You to TRUST in POLITICS and POLITICIANS

These men – really young men had been enslaved and removed from their homes forced into a new land with new faiths and new politics. Babylon and King Nebuchadnezzar had become a godless and wicked land. It had become a land filled with angry people, living ungodly lives and were being ruled by even worse governmental leaders.

Their leaders, in particular the king had determined that he was THE MAN. He was the final authority and so he builds a massive statue that was to represent he and his government, his greatness and his power.

But listen to what James says about this problem that seems to be a problem today, just as it was in the day of Shadrach, Meshach, and Abednego.. Don’t you know that friendship with the world is hostility toward God? So whoever wants to be the world’s friend becomes God’s enemy. Or do you think it’s without reason the Scripture says that the Spirit who lives in us yearns jealously? James 4:4–5

Now, maybe there were some folks that said to the king, “dude, this might not be the best or play.” “Are you sure that you want to require everybody to bow down and worship it?” But their world and this world wants you to worship something! And by the way, everybody is doing it, right? I mean, it’s a new rule, a new law. It’s what the king has requested.

We were made in the image of God, our Creator. We have been called to a citizenship that exceeds even the greatest country on the planet. The Scriptures teach us that we are citizens of Heaven! As Followers of Jesus, the priorities of our lives are to FIRST be governed by God.

So, a few dudes took this occasion to come forward and maliciously accuse the the three guys Shadrach, Meshach and Abednego. They said to King Nebuchadnezzar, “May the king live forever. You as king have issued a decree that everyone who hears the sound of the horn, flute, zither, lyre, harp, drum, and every kind of music must fall down and worship the gold statue. Whoever does not fall down and worship will be thrown into a furnace of blazing fire.

There are some Jewish guys you have appointed to manage the province of Babylon: Shadrach, Meshach, and Abednego. These guys have ignored you, the king; they do not serve your gods or worship the gold statue you have set up. Then in a furious rage Nebuchadnezzar gave orders to bring in Shadrach, Meshach, and Abednego to him. So these men were brought before the king. Nebuchadnezzar asked them,

“Shadrach, Meshach, and Abednego, is it true that you don’t serve my gods or worship the gold statue I have set up? Now if you’re ready, when you hear the sound of the horn, flute, zither, lyre, harp, drum, and every kind of music, fall down and worship the statue I made. But if you don’t worship it, you will immediately be thrown into a furnace of blazing fire—and who is the god who can rescue you from my power?” Daniel 3:8–15

These three young men. Bright promising futures ahead of them as leaders and leaders of leaders have been dared, as we are today to step outside of the binary, silly political winds of donkeys and elephants and stand firm on the Word of the Living God.

They were being dared to stand when the political ways and winds said to kneel. Even facing a persecution that goes way beyond being ostracized on social media. Way beyond uncomfortable conversation at the dinner table. Light years away from losing a promotion. They were dared to kneel or die. Kneel or be thrown into the fiery furnace. We are talking cremation heat. Instantaneous death!

But here is what they knew…they knew that they had been made in the image of God. They were image bearers of the Most-High God. They knew He would never leave them or forsake them.

Notice that the King asks the most telling question: “Who is this God that can rescue you from MY POWER?

All of a sudden, these young men have to make three choices:

1. What should I do politically?

2. What should I do morally?

3. What should I do spiritually?

They didn’t write an op-ed in the Babylon Chronicle. They didn’t form a protest. They didn’t set chariots on fire and pillage stores. They didn’t go on BabylonBook or Jewishgram and see what their other friends were doing. They had to stand on something that mattered with an eternal surety.

Shadrach, Meshach, and Abednego replied to the king, “Nebuchadnezzar, we don’t need to give you an answer to this question. If the God we serve exists, then He can rescue us from the furnace of blazing fire, and He can rescue us from the power of you, the king. But even if He does not rescue us, we want you as king to know that we will not serve your gods or worship the gold statue you set up.”

Talk about ticked-off. The King was outside of his mind!

This World and its Politics will dare you LIVE LIKE YOU TRUST GOD.

The Psalmist wrote in Psalm 34:7 “The Angel of the Lord encamps around those who fear Him, and rescues them.”

This desperate world needs to be rescued!

The King looks into the furnace and sees, not three, but four men in the fire. This is a King’s Holy Crap moment! These guys exited the furnace with all of the clothing intact. Without a scent of ash or fire. And the fourth guy? Well, He is no other than God Himself. He stepped in and didn’t let these faith-fille dudes avoid the fire. He did something far better. He got in the fire with them! Friend, God didn’t leave Heaven and come to this Earth to keep you from the fire, He came to get in the fire with you!

Politics is a game. A costly game. But listen, God isn’t playing a game. From the time of creation He has set His Kingdom in place and His Son, Jesus the Lord came to allow us entry into His Kingdom. A Kingdom with no term limits, no political limits and no limits of power. He has no boundaries, no treaties, no equals. He needs no allies, He isn’t elected and He has always been in charge, always will be in charge and doesn’t need the UN, NATO, presidents, kings, prime ministers or dictators. He is the Creator, Sustainer and Savior of the World and our allegiance is first and foremost to Him and to His ways and His will and we are to believe in Him, hope in Him, trust in Him and love Him. Why? Because He doesn’t need a strategy team, a press release, a spin doctor, a pollster, a pundit or a party.

He has one platform – YOU! You are who He has come to redeem and claim as His own child and in Him, the King of Kings and the Lord of Lords. He is the rule, the law and the truth.

Looking for a better way? Looking for a fresh and simpler way? Need a platform you can trust and a leader you can follow with all of your heart mind and soul? Then Jesus, the other in the fire is here for you!